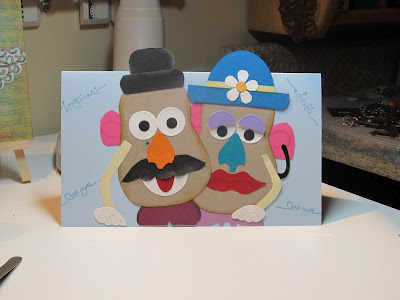 Yesterday was our 19th Wedding Anniversary!   Where did the time go?  It seems like I have been saying that alot lately!  Anyway, my husband is the romantic in out relationship.  Don't get me wrong- I love it!  But I am more of a whimsical type of person.   Have you ever seen those pictures of people who have been married a long time who start to look like each other?  I was thinking about that when I saw Mr. & Mrs. Potato Head  on Pinterest.  They were done in felt but they inspired me to do my anniversary card!
http://hereinthewaitingplace.blogspot.com/2011/08/felt-doll-for-boys-mr-potato-head.html

The other issue was that we had agreed that this year we wouldn't do anything special for our anniversary.  Next year is the big 2-0 and I wanted go all out then.  So no cards, no fancy dinners,etc.  My husband agreed.  What does he do the morning of our anniversary?  He comes in with a CARD!!  I didn't even have one started!!  So I wouldn't open his until I had mine made.  I was searching Pinterest for ideas and stumbled upon Mr. and Mrs. Potato Head.... They really do make me laugh!  My hubby laughed too!   Mr. Potato Head even has a mole by his nose like my hubby!!!  Anyway, Happy 19th Tom! 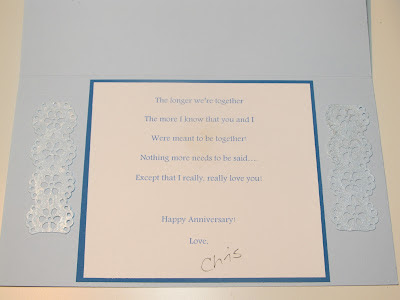