I baked a cake! 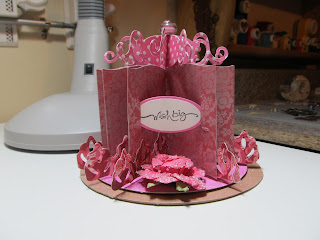 I had to try Joan's beautiful Paper Cake!  It uses Spellbinder dies and lots of glue.  The top of the cake is one of the labels die and the cake itself is the die that looks like an open book.  It is held together with a pipe cleaner!!  I just loved making it! This is my first one but I want to try different color combos.  I am not much of a cook but this cake was fun to make!  You can find Joan's directions for this cake on her blog here:
http://craftski.multiply.com/journal/item/508/Lets_Make_Cake  - She also had a video that shows how to put it together!  I hope you enjoy my cake.  The picture below just shows you the top of the cake.  I added some flowers at the base for fun!!  The bead at the top is from AC Moore.  I know who this cake is going to and I hope she loves it! 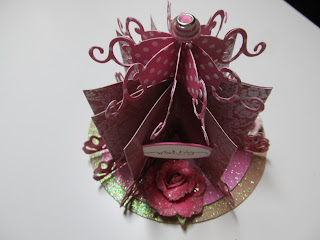 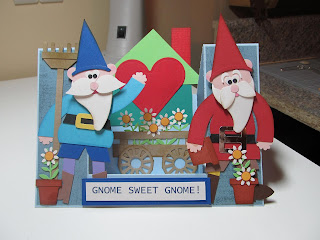 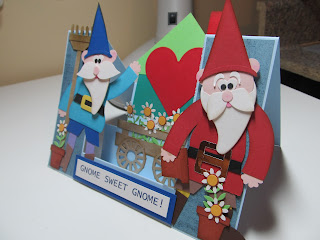 My brother and his wife have recently bought a new home and are in the process of moving!  I wanted to send them a Congrats on your new home card!  I got the idea for my Gnomes while I was shopping.  Now I can't turn around without seeing a Gnome. They are everywhere!  There is even a new movie out- Gnomeo and Juliet!  Apparently, Gnomes are hot right now.  Who knew?  I think I made mine a tad too tall.  My husband and my sister thought they were Santas!  Rats!  Next time I will make them shorter.  I used Spellbinder's Paisley die for their beards.  You cut a slit about not quite 1/2 way down and insert a round punch into it.  The ears are the word window punch.  The moustaches are from 2 different punches- the wing in SU 's bird punch and the Five petal punch.
Posted by Chris at 5:56 PM 7 comments: 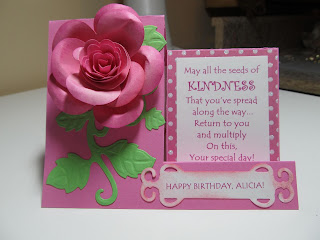 I had to try Valita's Owl Rose just to see if I could do it.  It came out better than I thought it possibly could!  I really love it because the bottom of the rose sits flat.  That makes it easy to add to cards!  This card is for a co-workers birthday!  I used Spellbinder's vine die for the greenery.  You can find Valita's video directions on her blog located here- http://valitasfreshfolds.blogspot.com/ 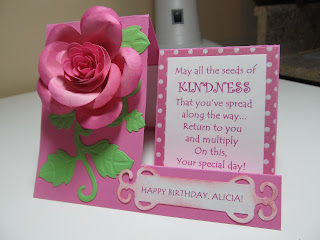 May you touch fireflies.... 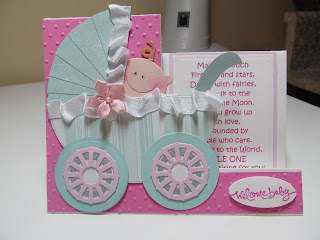 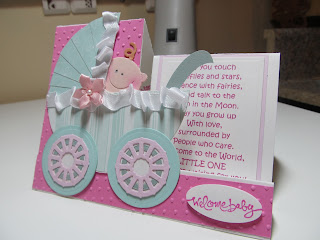 I have had another request for a "Welcome Baby" card.  I couldn't resist using the same baby carriage that I made recently but this time I added it to a stair card.  Again, I used Spellbinders die for the spoke of the wheels.  It is the center from the snowflake die.  Welcome baby is from Stampin up.  The sentiment ( I can't remember where I found this) reads- "May you touch fireflies and stars, Dance with the fairies, and talk to the Man in the Moon.  May you grow up with love, surrounded by people who care.  Welcome to the World, Little One.  It's been waiting for you!" You can find the directions for the Side Step card here:  http://jackietopa.typepad.com/addicted_to_stamping/2010/07/side-step-dresser-tutorial.html
Posted by Chris at 6:29 PM 2 comments:

A SNOW DAY IN MAINE!

I took these pictures recently after a snow storm.  It was early morning and very quiet.  I am reallllllly tired of all the snow storms but it really is beautiful right after a storm.  These are pictures in front of our condo and behind us in the woods.  I still can't wait for Spring!
Posted by Chris at 4:16 AM No comments: 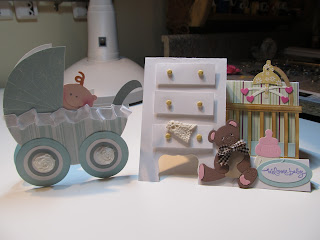 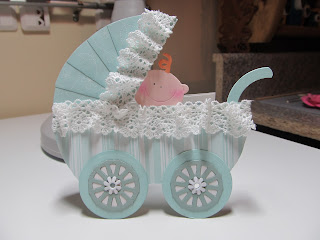 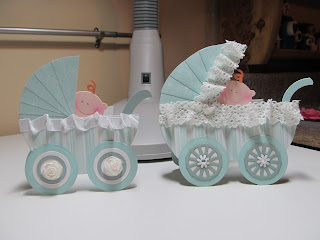 I made another Baby Carriage that was just a tad bigger than the original.  I also added a little more ribbon to it.  My Spellbinder's Snowflake die just arrived in the mail- the center of the snowflake was perfect for the spokes of the wheels on the carriage.
The larger carriage gives  you more room inside to use your sentiment!
Posted by Chris at 11:32 PM 5 comments: 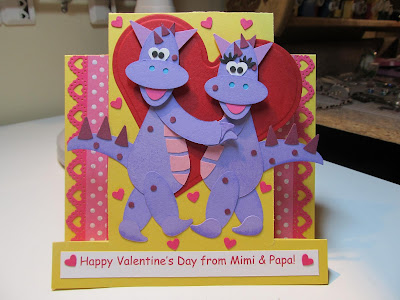 The weekend is over! Back to work tomorrow!  I have made my last Valentine card- I think.  I made Ezra, our Grandson, another Valentine Card!  I wanted to send him more than one to surprize him.  Since I had a couple of Dinosaur heads kicking around - I decided to use them!  Ezra loves Dinosaurs! The body of my Dino's are made from Spellbinder's heart die. I just cut it in half.  The legs are the large oval punch from SU- the feet the smallest Paisley die from Spellbinder's.   I haven't decided on the sentiment yet.  I may try and get Papa to do a rhymn for me.  He is good at that!
Posted by Chris at 6:08 PM 4 comments: 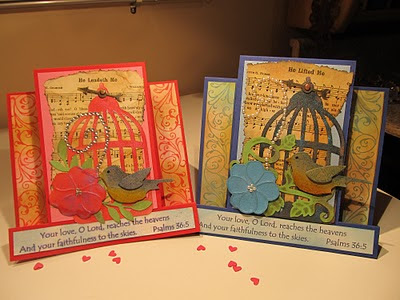 I am sending these cards to my Mom and my Mother-in-law!  Mom is in Florida visiting with another sister and my Mother -in- law is recovering from hip surgery.  I miss them both and can't wait to see them again soon!  I made the blue one first and then decided I wanted to try out another color.  I made a few small changes to the second one.  I used diamonds instead of pearls and I also changed out the greenery-just for fun!  I used alot of Tim Holtz's inks.  At one point, I felt like a chemist!  I mixed his Perfect Pearls with water and droplets of his Distressed ink.  Then I spritzed it on the bird cages and the flowers.  I even used a green color on the foliage.  This card simmers and shines!  It is hard to take a photo that shows the shine.  I have an old hymnal that I used Tim's inks on the pages to give it a more distressed look.  The card is the Funky Fold technique that I have grown to love! You can find Cheryl's great video directions here:
http://sweeetdesignsbycheryl.blogspot.com/2010/08/rrr-challenge6-aloha-funky-fold-video.html
A few more pictures below. 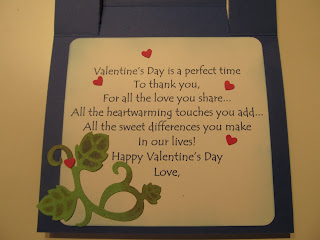 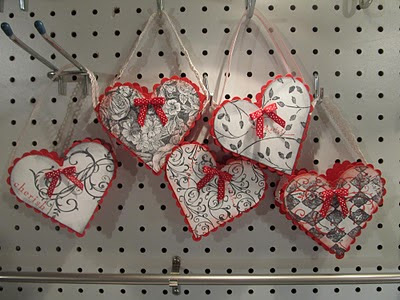 I had been looking for something to make for my staff for Valentine's Day and Valita's Heart boxes were just the ticket!  Her directions were soooo easy and fun to make!!  You can find the directions here-
http://valitasfreshfolds.blogspot.com/         The black on red look is something I really love!  I used 5 different Stampin Up stamps-  Baroque Motif and background stamps- Print Pattern & Floral.  The 2 remaining stamps are from the Stampin Up wheels that I removed from the wheels and added tacky glue to the back- I find this is easy to use than the wheels.  I don't know the names of those wheels.  I plan to add a little tissue paper and candy to the boxes.    Thanks! Valita, for your fabulous idea!!
Posted by Chris at 6:45 PM 2 comments: 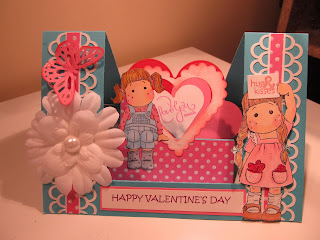 Well, I have done the side step card and now the middle step card! I love them both! I have made another Valentine Card for nieces.  We are having a pretty bad Nor'easter today and  I was able to come home early from work.  This gave me more time in my studio to finish this card! I found this great video by Mary with the instructions to make this Middle Step Card.
http://www.youtube.com/watch?v=4sfEcyuMFu0     I used MS's edger for the sides of the card.  Is it call a double loop?  These are a couple of my favorite Tilda's!!  The standing Tilda was holding a sprig of Mistletoe!  I was able to cut if off and have her hold a sign!  I also used Spellbinder's heart dies.  I cut the middle one's center out so you can see thru to the hearts in the back. Here is a side view- 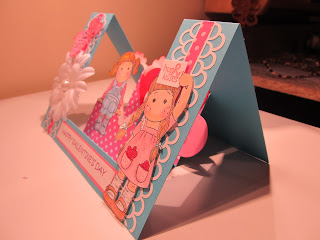